Should you let your baby cry her or himself to sleep? 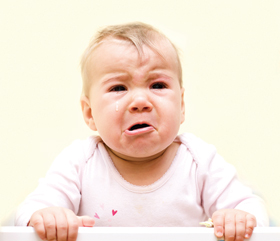 Controversial one this…well anything to do with parenting tends to be, as people have such defensive & at times aggressive opinions about it.

From what I’ve read, which admittedly is limited to a few relevant pages in one book, and 2 articles; I’ve concluded that “no” you shouldn’t leave a baby crying…

One of my favourite books of all time is called The Happiness Hypothesis, there is a section within the book (sorry, can’t remember the chapter) that talks about ‘Harlow’s Monkeys’, and how the (cruel) experiments he did on monkeys – where they received milk but no kind of motherly affection; dispelled all the theories about Behavioural Psychology and babies.

You can learn more about ‘Harlow’s Monkeys’ in this excellent TED x talk:

The 2 points to take from the experiments are that:
1) Babies are born prematurely compared to other mammals, with underdeveloped brains – they can’t walk etc like other mammals.
This is because the human brain gets so big, and human hips are relatively small. For this reason, at 40 weeks, it’s physically the best time for the baby to ‘come out’.   Any longer, and well…you can imagine the problems caused by the disproportionately large heads that human babies have.

Babies are therefore primarily ‘instinctive’ in behaviour – if you’ve heard of the triune brain model, a new born babies brain is basically ‘all reptile’ in terms of its development.  This sounds odd, but you can learn more about the triune brain here.  It’s a bit outdated and over-simplistic but still quite an effective way of grasping an understanding of the human brain. The reptile brain, is the most basic part of the brain, responsible for impulses and instinctive behaviour, such as crying.

This simplistic brain cannot adapt, or learn from reinforcement, rewards, experience etc. So by leaving your baby crying; it might eventually stop, but it, in theory, won’t make him or her less likely to cry, or to cry less in the future.

In contrast, dogs and other mammals are born with a fully functioning ‘limbic system‘. According to this website, the limbic system –

“It appears to be primarily responsible for our emotional life, and has a lot to do with the formation of memories.”.

The presence of emotions and memories in the brain of a puppy or other young mammal, mean that they can be trained etc. and that Freudian and Behavioural style psychological techniques work in manipulation of their behaviour.

2) This is more of a general point, and I don’t fully understand the science behind this, but from what I’ve read, children need a secure ‘attachment figure’.  They’ll be extremely anxious in later life, if they don’t feel secure and safe when they’re an infant.  In Harlow’s experiments with monkeys, those that were separated from their mothers shortly after birth displayed all kinds of psychological problems, and would cling to anything for comfort.  This behaviour contradicted the Freudian theory that babies were only attached to their mothers, because of the ‘reward’ of milk.  The monkeys received milk from a metal model of an adult monkey, but would ignore the model unless they were hungry.

It’s a bit upsetting, so I won’t link to it, but if you read any of the academic papers about Romanian orphans, the same issues occurred. Despite being fed when hungry, and changed and washed when required, the orphans displayed psychological issues as infants.  They would also show the ‘attachment instinct’ to any adult that showed them any attention – literally following them around.

Obviously, there’s more to attachment-theory than what you do when your baby cries, but it is theorised to be a contributing factor.  Babies are extremely vulnerable and not supposed to be independent in anyway, so trying to toughen them up, or teach them something, is in theory, not going to work. In fact, I read somewhere that putting your child in the ‘naughty corner’ is more traumatic than smacking them, as a child’s instinctive fear is being abandoned. You can’t spoil a baby, you certainly can’t spoil them with too much love.

…a person (or child) who has formed a secure attachment
“is likely to possess a representational model of attachment figure(s) as being available, responsive, and helpful and a complementary model of himself as at least a potentially lovable and valuable person“

I’m sure there are strong arguments against attachment theory (please, comment with a link if you find anything), and it’s not always physically possible to attend to your baby when you’ve had 2 hours’ sleep and you’re hallucinating at 4am in the morning when baby is going mental but this is what I’m sticking with for now.
In fact, just to balance this post a bit, here’s a counter argument on Huffington Post.

I would really, recommend watching the video above if you get chance!

oh, and just to finish…apparently the ‘cry it out’ method doesn’t work anyway:

“A 2002 BMJ study of 156 mothers of babies between six and 12 months showed that babies who underwent controlled crying for two months slept better, according to their mothers. However, when the study finished after four months, the sleep-trained babies slept no better than those who hadn’t been trained, suggesting that time sorts it out for most babies.”

I’d love to hear/read people’s thoughts on this, so please leave a comment